The Mini Figure Militia has released their Exclusive Oozarian Green Slime Colorway of that classic OMFG Series 3. The six figure set includes Pugnacious, Barbarianaut, Doctor Decay, Ten Can, and Fruit Punch return along with Zombie Pheyden in translucent green. You...

October Toys is looking to fund their OMFG! Series 4 GID lineup with a new Kickstarter campaign. This series, which is similar to collectible mini figures like M.U.S.C.L.E. and Monster In My Pocket, was already released - however never in this colorway.  OMFG Series 4... 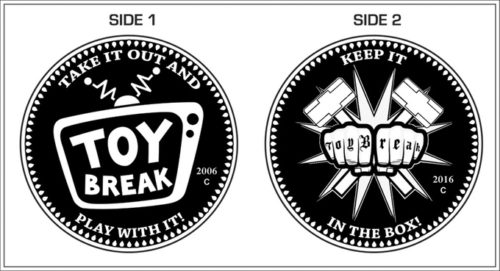 In celebration of the 2016 24 hour live Toy Break event, the folks behind Toy Break and October Toys are making a special 10 Year Toy Break Coin available via a special Kickstarter campaign. One side of the coin shows the Toy Break logo, the year the show was...

This week's episode of Toy Break features guest Doktor A. The good Dok joins Ayleen and George for Episode 379: DCon 2015 Wrap Up to discuss Designer Con 2015 and to look at goodies from the event.

Toy Break Episode 377: The Out Of Order One

Corwin and Geoff Webb are on the Toy Break couch for this week's episode of the show. Episode 377: The Out Of Order One features closer looks at Loot Crate, Star Wars, Ewoks, and much more.